I've been doing a lot of searches on this forum as well as on google but did not get any answers on how to use the IF module in TDP.
I have version 4 and 5.6 with not much difference.
I have several scripts and Export modules that are run which I wanted to capture in a log if any of them failed.
I run these on a remote server and have to monitor the output at the expected scheduled time but you only know the TAS has failed if the output does not land when expected and that's when you log in and check the logs.
I have an e-mail script that I have got setup to run in Oracle which i wanted to use in the case of TAS failing.

So after many hours, I managed to get this setup - but am not totally convinced it will capture everything - but may help anyone out there

Note that one has an 'OR' whilst the other 'AND' 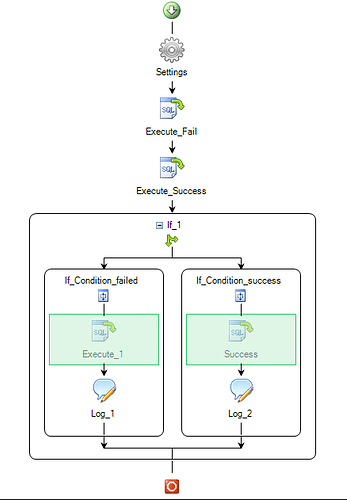 I think you have your logic almost there, and maybe even spot on if certain assumptions are in place:

Thanks Gary.
I noticed that I can't use my own solution if I'm using a export module and only use this if I'm running scripts module.

Any idea what I can use to capture a failure on an export or an import module along with scripts?

Not sure about capturing the error message of one of the modules, but definitely look at what gets returned from the #ACTIVITY_RESULT# variable... e.g. do a quick test with a two step job, where you run your export/import, maybe with known error (step one task) then produce a comment in the automation log that displays the #ACTIVITY_RESULT# value (Log Comment step as task two).

Maybe the error message is still captured in the #ACTIVITY_RESULT# variable, and then you can define your If-Then logic accordingly, since you'll know what to look for.

I can't seem to work out what it's doing.

I have a test TAS where I'm trying to understand how all of this works, where I have 2 'run scripts', one working and one that would fail.

I have also added a log below each one to capture the #_ACTIVITY_RESULT#.
If it works fine then I get no result and if it fails then I get this :
('Execute_Fail - Oracle Database Error; Inner exception: ORA-01843: not a valid month',)

So with the instr bit above, how do I capture this in my 'IF' block so it works.

This is what I have at the moment :
'#_ACTIVITY_RESULT#'>0 this is for capturing errors

and this for when there is no errors

and regardless of me enabling either script 1 (working) or script 2 (which would fail) I get the same output stating that the output has no errors even when one of the script would fail.

hope the above makes sense

The INSTR(string, substring) function is an Oracle function returns the location of the first character in which substring occurs in string.