TPD Error with Variables: Set_Variables - Object Reference not set to an instance of an object

I have an automation file that needs to get three parameters from the user: :FirstDate, :LastDate and :YourEmail. The job then runs four select to file jobs which are supposed to use the the FirstDate and LastDate to get activity counts for the date range. Then send an email with each of the results.

What am I doing wrong?

Hard to say without seeing how you're trying to implement bind variables in your automation flow steps.

Having said that, TDP Automation jobs do support bind variables, but you may have to define them (using the Set Variable task) per below. In addition, dates are handles differently in different database platforms, so you may have to play with date casting functions. See snap below for an example, where I had to use a TO_DATE() casting function on Oracle. Hope this helps give you some ideas. 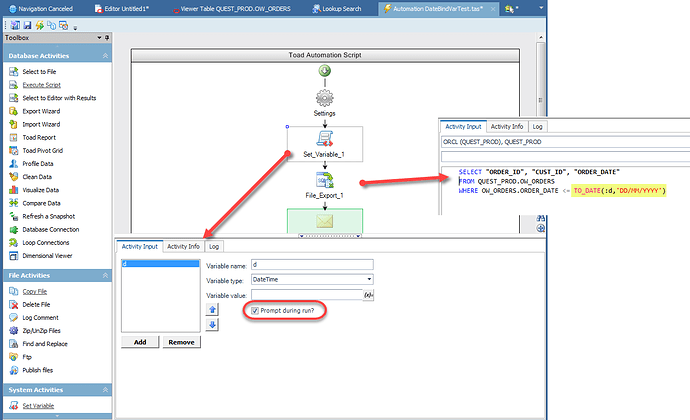