Script to gonvert from Domains to Integer + Identity columns

Trying to adapt my data model to produce adequate SQL script for database creation. Since the MS SQL physical model is created from Universal model on a weekly basis, have to perform some repeatative actions

For instance, I have to manually edit about 20 entities and change their Primary Keys attributes to be DataType=Integer and Identity = true. Looking to write JScript to do it for me automatiucally, happy to hard code the entity names in the script.

This code does not seem to do it, I suspect the reason is that the Attribute has DOMAIN defined, its DataType is blank. So the script needs to somehow blank out the Domain and then set DataType 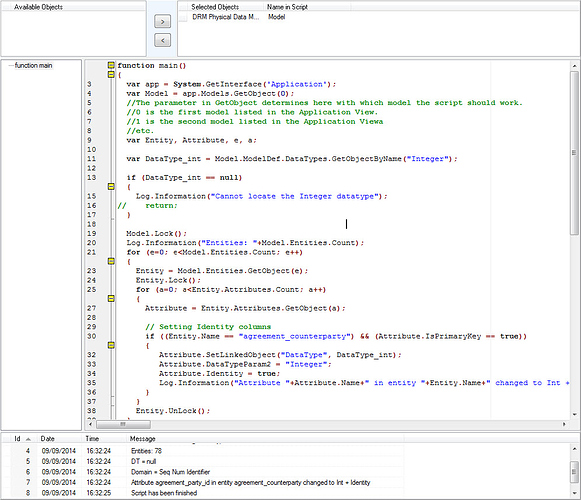 I’ve just tried doing the same thing in MS SQL 2012 model and the Integer data type was assigned to all PK attributes that had previously defined Domain with no problems.

Try to check the following things:

Hi Lukas, yes this was it, had to change it from “Integer” to “Int” and it all worked. Noted on the Parameters. thanks for your help