Selecting Add to Saved SQLs from the main Editor menu presents all the options. 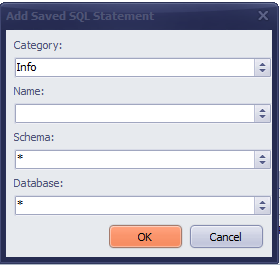 The Add to Saved option from the Recent window only allows selection of the Category but not Name, Schema and Database.

It would be convenient to also have the Add to Saved function available in the context menu of the editor window.

We've actually got some improvements to SQL Recall ready for version 17.0.

One of them is: Add To Saved from SQL Recall Recent tab will include Name. (Would Schema/DB helpful? That should just come over from Recent)

The Editor Context menu is a mile long already.

You could make a shortcut for it under Options -> Toolbars.

Hope that helps for now.

Agreed, the context menu is already too long. Is there a way to customize it and remove items I rarely use? I'm probably getting off topic now.

One of them is: Add To Saved from SQL Recall Recent tab will include Name. (Would Schema/DB helpful? That should just come over from Recent)

Yes, schema/DB would be helpful

It's not possible now but that's a good idea. We allow toolbars to be customized, why not context menu?

Is there a reason why Recent doesn't save the terminating semi-colon with the SQL?

More often than not I'm working in an editor that has other SQL so having the terminating semi-colon when I scroll through with ALT-up/ALT-down would allow me to hit F9 right away to rerun it without having to add a semi-colon at the end.

no, but we can add that