How can I send an automatic email when a process fails? I tried to see if there's an option for sending emails when the Run Status goes "Failed validation" but I didn't see anything.

Is there a way to send an email telling me when this fail validation happens?

Hope to find an answer from all of you!!!

No that's not possible, because "Failed Validation" usually means that an action isn't set up right/completely, so it's not likely to fail validation once it has passed, unless you manually change something to cause it to fail.

If you let me know more about your situation, I might be able to give you a more helpful answer.

I created an action inside of an App folder that executes a batch file doing a rename. Then put an If condition inside of an action asking if there's a file in a folder. If exists then I put an action executing a batch file to rename the file that exist. If for some reason the batch file doesn't recognize the name inside of that folder then the Run Status will give me a message of Failed Validation. This will stop all the rest of the actions that I created. The thing is that if there's an error then I want to create an email notification that sends to me the warning of this kind of issue.

I can send an email when all the action process is completed or if there's no archive then send an email warning message. The only thing that I need is a email notification when an error occurs.

Hope this details can help you understand my situation.

John, I've got a test script to simply add a column to a table an move the script when done. When I run it outside the scheduler it works. However, when I try to schedule it to run, I get a failed validation run status. I'm investigating the possibilities of running my ddl scripts after hours via the automation designer vs having to log in at off hours. Any advise? I haven't gotten anything to work via the scheduler.

This sounds vaguely familiar. Does it show any reason for the failed validation under Execution Log? For example: 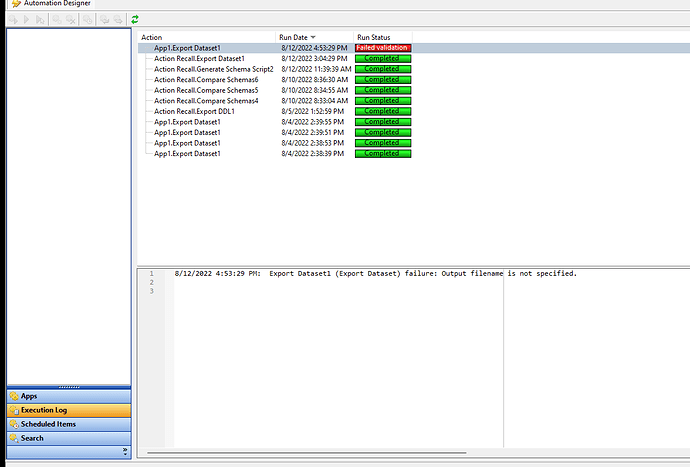 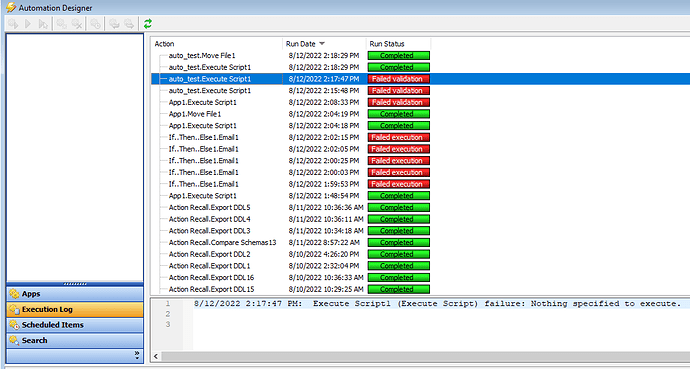 Is the script to be run on a mapped drive, or somewhere that would not be accessible if you aren't logged onto windows? We do a "file exists" check on the filename specified in the script action. If it's not found, the "not specified" message is given.

There probably is some way to make it a network share available when you aren't logged in, but I don't know the trick offhand to making that work.

Maybe if you use a UNC path instead of mapped drive?

Thanks! It's doing a windows scheduler correct? I can get a Sys Admin to help too. Not sure if they would support the access in our security model anyway. I'm guessing there is not a setting in the automation Designer to run specific scripts via Oracle Scheduler?

Yes, Toad just sets things up in the windows scheduler. You should be able to find the actions that Toad set up by going through the windows task scheduler. Look under Library\Quest Software\Toad 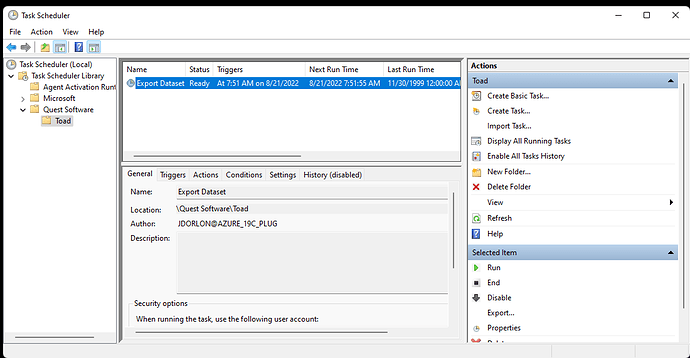 Anything set up on Oracle's scheduler would happen on the server, not your PC. It is possible to run scripts that way, but that's not what Toad's Automation Designer is using.

Thanks John! It would be added value if there was a similar interface but work on the Oracle scheduler. Maybe that is too close to Toad DBOps.

You can create/alter Oracle scheduler items from the Schema Browser. Just change the "Object type" dropdown to "Sched Jobs" (there are a handful of scheduler object types) 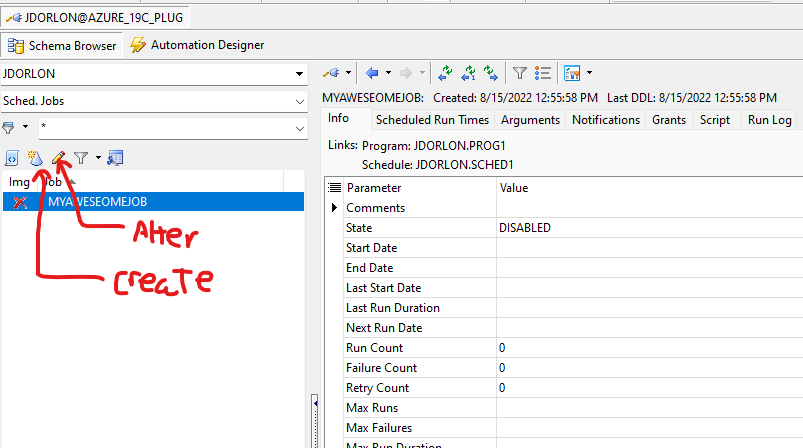 Thanks. I was thinking more elaborate, benefits of running scripts in the DB and the ability to move files, send emails ....

Not a problem at all.

You could definitely put all those pieces together with Oracle's scheduler. You'd create Scheduler programs to do all of the individual pieces (copy a file, run a script, send mail). Then you can use a scheduler chain to run them (IF A succeeds then run B, if A fails then run C, etc).

Oracle has a pl/sql package called UTL_SMTP that can send email.

Oh yes, I may get there if time allows. Just was hoping your interface would handle it.