On Monday, you can do this

In version 15.1, we added the ability to connect to an Oracle database without using an Oracle client. It works, but it's a bit clumsy because you had to provide host, port, and service_name. Who's got time for all that?

Monday's beta adds support for TNSNames.ora in No-client mode. Toad will find your tnsnames.ora if it exists in the location specified by TNS_ADMIN, and if you're feeling too lazy to set that up, you can just put it in the same folder as Toad.exe.

The login window will looks like this if you don't have a client installed: 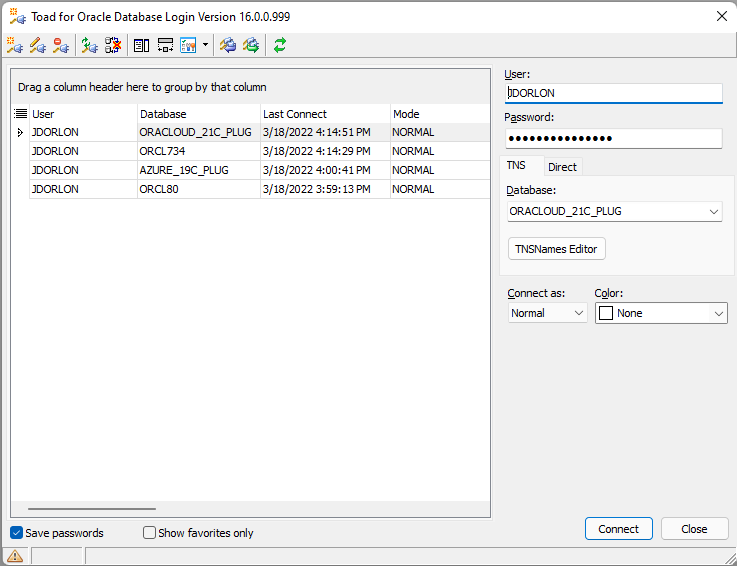 But here's where it gets interesting. If you happen to have an Oracle client installed, you can still connect without an Oracle client by unchecking the new "Connect Using Oracle Client" box. 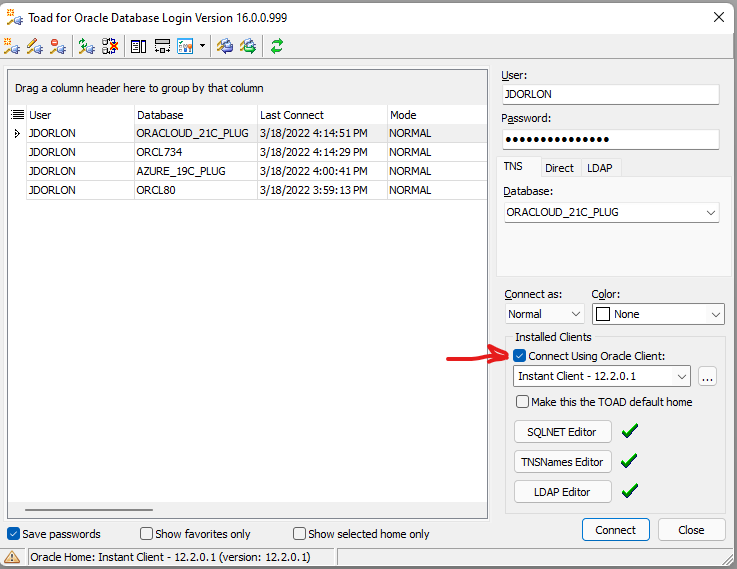 Why would you want to do that? Maybe your client won't let you connect to a specific database version, just as an example. In the screenshot below, I'm connect to Oracle 7.3.4 and 21c at the same time!

Note: Technically, we don't support Oracle versions older than 10.2, but for the most part, these older versions will still work in Toad. 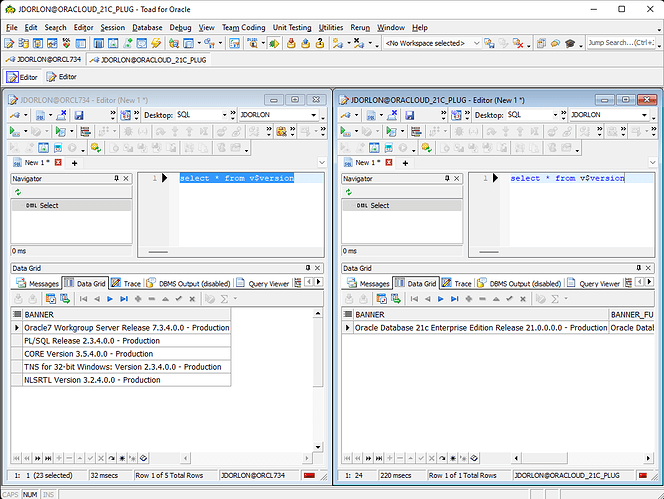 Hi, there is the problem with timezone in timestamp when use non client mode.
Client mode:

Which database version is that? I tried two different 19c databases, in different time zones. I got the correct result for each. One of them happened to be +00:00 as in your first screen shot. The other was -05:00

For me, 12.2.0.1 works fine also. Are you connected to the same database in both of your screen shots. I noticed on the one that has the wrong time zone, the date and time is in the future. 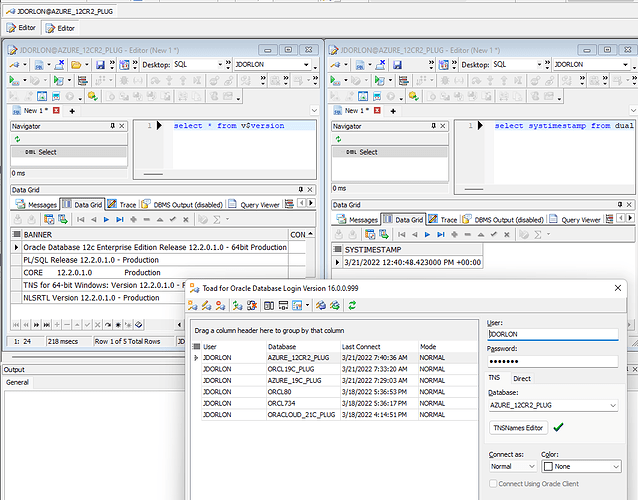 Yes, it was the same database and connection at the two parallel open Toad.
It happens in my test db and prod db.

Thanks but you should make it work out of the box for those who don't know what to do. I had to import my saved "TOAD settings file" (as usual) to still be able to connect to our databases using the new version of TOAD - still using Oracle Client. However, that import also gives me my preferred TOAD setup/ look so I don't mind. The "copy user settings" is still the best new feature ever in TOAD in my opinion and it has saved me so much time having to start from scratch in every new version before it existed - although I wonder why it takes so long to export my user settings.

@sjoh I don't understand what didn't work out of the box for you. Can you send a screen shot?

John, maybe this will help

"...the ability to connect to an Oracle database without using an Oracle client.." didn't work. But I overlooked you're not writing about the latest version but I guess a brand new beta version which apparently reads the TNSnames.ora file. I guess that's exactly why it didn't work for me out of the box because the latest official version 15.1 doesn't do that.

Yes, I was referring to the beta version. 15.1 can connect without a client but it is not as user-friendly. You have to specify host/port/instance name to do this in version 15.1.

If you want to try the beta version, go here to download it.

I can reproduce that on some databases, but not all. I think it only happens on the ones where DBTIMEZONE is not zero. I believe this is a bug in our 3rd party library that we use to connect to Oracle. I have reported the bug to them and provided them with a demo app.