I'm on Toad for Oracle 16.2
This query returns 9833 rows. The data grid shows 2000 rows were already fetched and took a couple of minutes to run. It took over 20 minutes to come back. The first time I exported the same dataset it only took a few minutes. 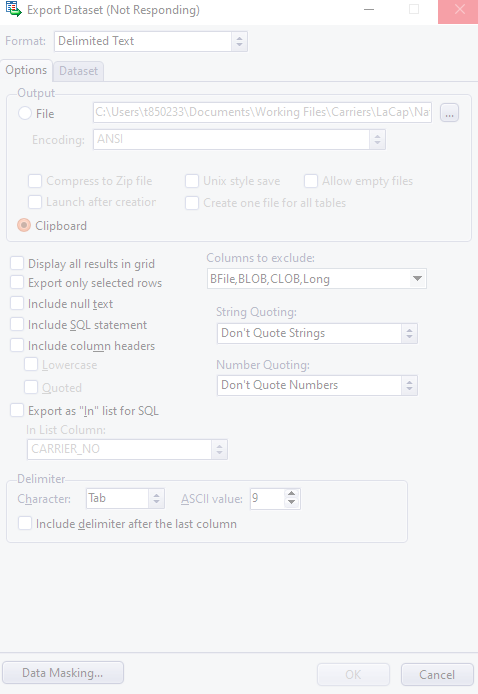 Not much to go on here, but I'll take a couple of guesses...

Literally, there could be any number of factors that cause differences in execution/retrieval/export times... again, just guessing at the causes here without additional info (like steps to reproduce, etc.)...

If you know you have a slow-running query with a limited number of rows (this case seems to qualify for both), it is faster to check "Display all results in grid".

Display all results in grid:

That said, it seems like in your case, Oracle was taking a long time to re-execute the query. If this is repeatable, maybe you can trace the session in the database to identify the cause of the slowness.

It's hard to say whether it was DB load that caused the delay. I had done the export minutes before without issue and I only added an additional filter condition the second time so there should have been fewer records. Populating the data grid took the same time but the export was much longer.

When I run a query from the editor I get a progress dialog that I can cancel. Can the same be done when running the query for the export?

No, the export dataset internal query isn't cancellable, but I think it could be made to be so.

Thanks John, it's not so much the ability to cancel, it's more the progress indication instead of the Not Responding when I click on it.

Well, when the query is executing, we can't give you any progress info because we don't know how long Oracle will take to execute it.

Once it starts fetching though, you can see the progress at the bottom of the export dataset dialog, and at that point it is cancellable. But 10,000 records honest should export very fast once it makes it to the fetching stage. Unless there are CLOBs or something like that involved

What I meant by progress is the timer not the records retrieved. At least with the timer moving I know Toad isn't hung.

They're actually kind of a package deal. I'll see what I can do.