Filter schema browser with trailing space does not work 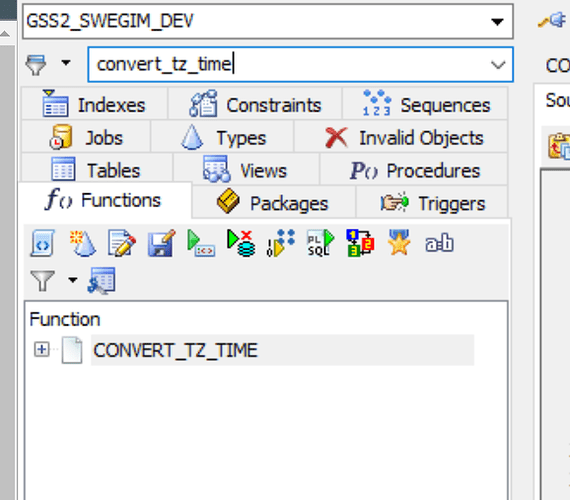 Looks like we trim leading Spaces. However, anything following the pattern you enter will be considered part of the pattern. As best practice, I always use the wildcard character if I'm trying to get fancy... e.g. the filter pattern %C%C% in my Schema Browser returns matched functions per below snap.

Note to Quest Dev...
would be useful to allow regex patterns in the ad hoc filter box (and formal filter pane too, BTW). 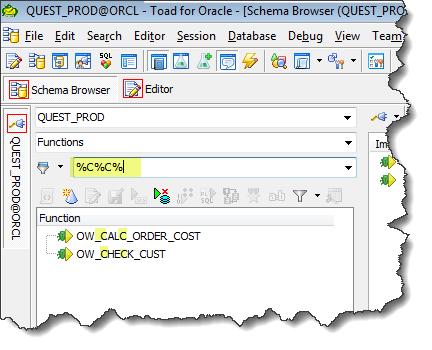 I use the wildcard symbol all the time as well.
I noticed this when I copied a p_full_name from a Teams chat and pasted into the filter field and nothing was shown.
Apparently when you copy from different programs an extra space is often added to string

Quest Dev may want to consider trimming trailing spaces in the filter fields as well, since it's very unlikely that a database object name would contain a space char.

I'll trim the spaces. Thanks.

It would be great if REGEX patterns were allowed in the filter box.

I really don't want to add a "regex" checkbox or something like that to turn regex on/off here. Also, at that point, I'd have to remember if each saved filter text is regex or not.

Hm, Maybe there could be a special key sequence to indicate it's regex.

For example, right now, you can do a NOT filter by starting with !

!a* will show you everything which does NOT start with the letter a.

I could do something similar to indicate a regex filter.

Maybe {R}, but that doesn't roll off the fingers too easily. Suggestions?

Would it even be the full REGEX notation or just a subset?

full, unless there is some reason not to. I mean, If we're gonna do this, we might as well do it...

Then, how about using [ ... ] for signaling REGEX notation?

Would that just be a dll? You wouldn't have to code all that up yourself?

So, the whole thing in brackets? That could work.

We have an internal regex library that we make heavy use of already in Toad. I would just use that.

Yeah, the whole thing in square brackets. We already have to use brackets for some character classes in REGEX, so what's a couple more.

Mike just pointed out to me that if we do it this way, the only 2 ppl on the planet who will know about this feature are you and me, lol. He's probably right. I'll see if I can come up with a built-in button or something in the filter box.

Also, I forgot that we are already storing the history in XML format, so it shouldn't be that big of a deal for me to remember if each filter item is regex or not.

This will probably not come until the version after 16.2 though. We are about done with 16.2.

Thanks for considering it.