In the schema browser filter all filter options except IN and NOT IN automatically add the '' characters for varchar2 fields, would it be possible to do that also for IN and NOT IN?

would it also be possible to make Ctrl+u for uppercase and Ctrl+l for lower case work in this filter dialog, same as in editor?

That seems reasonable. I don't remember if there was a reason that we didn't include this with in/ not in. I think we can add the upper/lowercase shortcut there too.

I logged it internally so I don't forget about it.

If I type A,B,C using in or not in operator for a varchar field it would be great if they are added as IN ('A','B','C') when I click add to filter button

I'm not sure if you're aware of this, but if you use this button to find the values to filter by, they are automatically quoted. I realize that this technique might not be practical if you have lots of possible values. Just FYI. I'll still add your request. 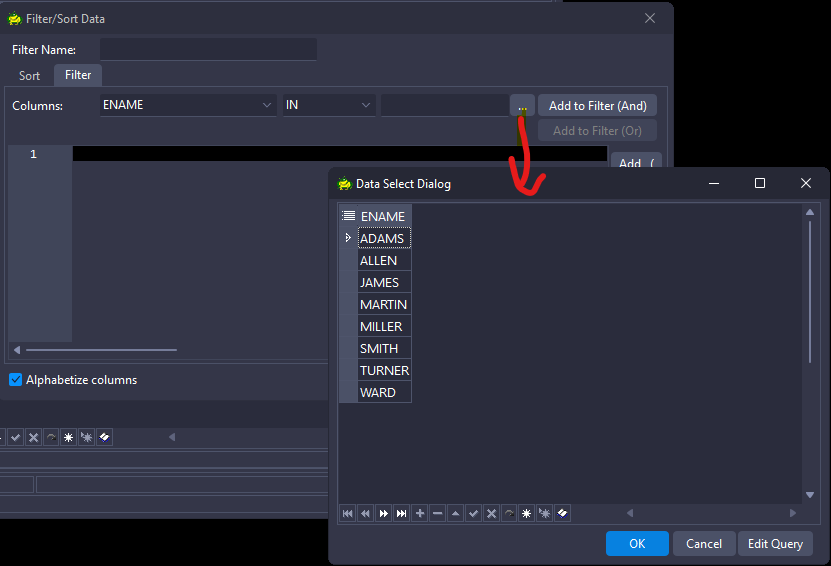 I had never paid attention to those three dots and see the usefullness for sure.
In a table with a few miljon rows it does not allow picking the right criteria easily, it however does allow me to pick the number of items I need and then update the filter in the textbox.
I still think that the improvements I suggested should be made when time permits.

It is fantastic, I have been using Toad since perhaps 2003 and still learn new things all the time.
I must say that Quest and the team working with Toad has improved a lot these last few years and I am really impressed and thankful for all you guys do.
John! You are a rockstar.

Thanks Esko, I appreciate that.

These changes will be in Monday's beta.

I think we can add the upper/lowercase shortcut there too

Indeed you are a rockstar.

It will be very nice if the upper/lowercase shortcut would work in other dialogues such as "find", "variables" (when running a select with bind variables, pasting a value for a variable and it needs to be in a certain case), etc...

I made the change such that upper/lower case should work in any edit control, regardless of which window it's in.

BTW, today's beta will likely be delayed, but this change should be in the next beta, whenever that is.

The changes works great, thank you.

BTW, the upper/lower case improvment was there, but it is not in the release Notes