We've run into issues with the "cannot access a closed file" error periodically and were later told by Quest that writing to a local db table was a possible solution. However, what we're wondering is if the issue is related to a process not waiting long enough for the file to be released and if we need to introduce a time-delay somewhere or restarting a process like explorer.exe.

The issue is very transient and doesn't happen for some time and then suddenly becomes a persistent issue. We're trying to avoid having to rework all the existing processes if we can figure out how to handle the file access.

Have there been any further developments by Quests as there appears to be a number of threads on this topic within the forum.

Ok, we're trying to write to the local db, but there is no db name to select so while we can setup a table TDP does not appear to recognize a db and does not display an option to select it. Selecting nothing is accepted, but upon execution fails with a db not selected error.

We're using the wizard to establish a connection so we're able to select local db, but when we get to the select target point in the setup the schema will populate nothing. The target connection shown however says Local Storage Connection.

From your second post, it appears that you're using an existing Import template (in an automation script?) to import into a Local Storage table whose database is/was not specified.

Let's begin at the beginning... when you log into Local Storage with TDP, which databases/tables have you created? You should be able to see them in the Object Explorer... see snap below.

Once you've created that database (schema) in your Local Storage then you should be able to select your target database/table in the Import wizard. Hope this helps. 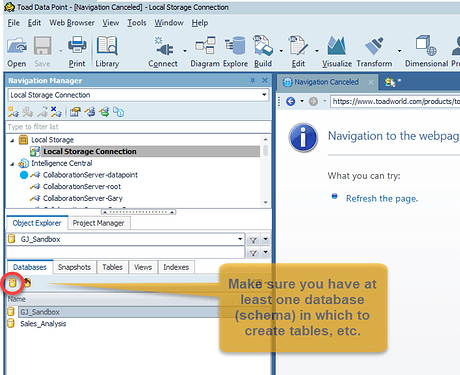 I see what the issue is. A local db was never created so that step was lost on me. For some reason I thought TDP already knew where the instance lived. I just created one so I'll see if it shows up in the dropdown now. Appreciate the input.

What kind of db is the local instance? I'm using varchar, int, and datetime and this cryptic message doesn't offer more info to correct with.

The underlying database flavor for Local Storage is MySQL. Unless there's an unusual datatype (like some datetime types have special masks on some databases), TDP should take care of types like VARCHAR, INT and mainstream DATETIME. I have created tables in Local Storage many times with these types in play.

However, there may be instances where the datatypes don't match well from source to target. In these cases, you might need to "tweak" or re-format the data before creating (or importing into) a Local Storage table, and the Transform & Cleanse capability should be a big help here if that's the case. Hope this helps.

I'll try casting some values and see if it behaves. I've experienced similar issues with using dates with TDP variables.