Adding Exclusion Filters to Projects is a very cumbersome process. It would be really nice if it was possible to set some Global Exclusions that would be applied to all objects like TEMP_% to exclude Temporary objects. 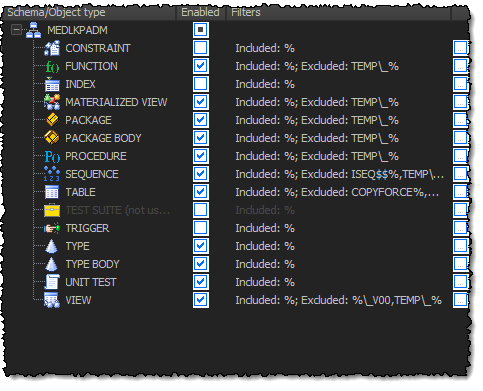 For clarity, you mean being able to specify the exclusion pattern for all object types (once), so you don't have to go into each type and specify it separately, correct?

I'd say it's a good enhancement suggestion. If Dev puts in the product, are there other global filters you (or others) would like to suggest? Be nice to have a pre-populated drop-down of commonly-used filters.

I think it really comes down to how many users stick to naming conventions. My team it really good about that so we know for sure all objects we create Table/View/Sequence/Package... that is named TEMP_% is temporary to test an idea, so should be excluded. In that case I would want that filter applied to all objects in all projects created on that Oracle instance. We also have a standard when logic in a View is being changed the first step is to replicate the current view and append _V00 to it so you can do a data compare between the new logic and old and verify all expected records from the original are in the new one. In that case ideally excluding %_V00 would appear for all Views in all projects on that Oracle Instance, but in reality the only objects we ever append _V## to are views so the exclusion filter could be applied across the board and still have the desired effect.

I would assume every team that creates database objects probably has different standards, so I am not sure a dropdown list is feasible. You may however look to add some filters by default that users could remove if desired for Oracle generated objects that really should not be included in Team Coding, like tables starting with MLOG$% which are created when a Materialized View Log is defined and would never be created/altered directly. The same could go for tables starting with RUPD$_ also related to Materialized View refreshing. I assume on the Sequence side you should exclude ones starting with ISEQ$$_ and under Constraints exclude those starting with SYS_C as they are also autogenerated and should never be manually modified.